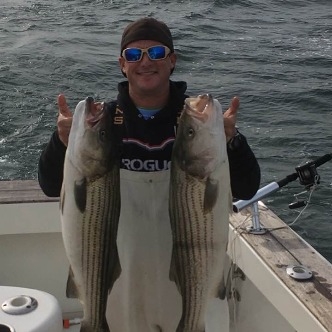 Side Job Fishing Charters is run by Captain James Richardella, who has more than 25 years experience hunting big game fish in the waters of the Atlantic, Caribbean and the Pacific. He has scored big in some of the world's most competitive tournaments. James is a Maplewood firefighter and EMT so feel at ease on this charter experience. Novice anglers, families, or extreme big game hunters, all are welcome and your charter experience will be catered to your skill level and desired fish targets

New Jersey Fishing Near Me

The map shows where we fish. The red area is our primary fishing area depending on time of year and fishing conditions. The pins represent guest meeting locations.

Located our of Belmar, NJ, Side Job Charters services the Atlantic Ocean from New Brunswick at Raritan Baty to Long Beach island outside of Philadelphia.Side Job Sportfishing has access to some of the best fishing in the world. From Striped Bass to Bluefin Tuna, Yellowfin Tuna, and Bigeye Tuna, to Black Sea Bass,Fluke, and Blackfish, Whether you want to stay inshore or run miles offshore to the canyons for tuna, Side Job Sportfishing has got you covered.